The Story of his “Relics”

Father Chanel was done to death soon after 7am on 28th April 1841. His murderers stripped his body of clothing, but some sympathetic women came soon after,wrapped his body in mats of siapo (tapa cloth) as was the Futunian custom and buried it with traditional ceremony.

Bishop Pompallier was at Akaroa in the course of visitation to Mission Stations down the east coast of both main islands of New Zealand, when news of Fr. Chanel's death reached him on 4th November 1841.

He arranged for a French naval vessel L’Allier, commanded by the Comte du Bouzet, to accompany the Mission schooner the Sancta Maria and to sail for Wallis and Futuna Islands, taking with him Fr. Philippe Viard S.M. The two vessels arrived at Wallis Island on 30 December 1841 after a journey of 32 days. Fr. Bataillon S.M., the missionary Priest on Wallis Island persuaded the Bishop to stay a while on Wallis, where the harvest of conversions was in full swing. The Bishop sent Fr. Viard to Futuna Island, where after having to wait offshore well over a week because of contrary winds, he was able to land on 18th January 1842. A chief named Maligi, who had not agreed to Chanel’s murder, agreed to disinter Fr. Chanel’s body, and brought it to L’Allier the next day, again wrapped in several mats.

The Commander of the vessel asked the ship’s doctor M. Rault, to inspect the remains. After a prolonged examination he was able to certify the identity of the remains bearing in mind the description of the manner of the Saint’s death given previously by Brother Marie-Nizier S.M., Fr. Chanel’s assistant. (Brother Marie—Nizier had been able to escape to Wallis a few days after Chanel’s murder and accompanied Fr. Viard back to Futuna Island).

The doctor undertook to embalm the remains so that they could be kept without upsetting the crew. They were wrapped in linen and placed in a cask, and taken to the Sancta Maria. Bishop Pompallier decided to stay on Wallis Island, and Fr. Viard, on the Sancta Maria brought Fr. Chanel’s remains back to the Bay of Islands in New Zealand. He arrived on 3rd February 1842.

Late in May 1842 a French Vessel, the Jonas arrived in the Bay of Islands. The ship’s doctor visited the Marists there, and they mentioned to him their concern to have Chanel’s remains more fittingly cared for. The bones were by now completely stripped of flesh. With the Doctors help a little tin chest was made and well-lined with linen, and the remains were placed in it as decently as possible. This chest was wrapped in linen., and then placed in a “box made of good quality wood”.

After telling Fr. Colin, the Founder and first Superior General of the Society of Mary in France about these arrangements for more appropiate care of the Saint’s remains, Fr. Forest S.M. said that the box would be kept “in a fitting place”. Just where that “fitting place’ was, is not known today. As Fr.Kevin Roach S.M. observed "it is improbable that the printing house and store ( for that is what the building now called Pompallier House then was) would have been seen as the suitable resting place for a martyr.”

The Saint’s remains stayed at Kororareka until 1849. Bishop Pompallier drew up a document proving the authenticity of the bones, and gave the axe which had smashed the missionary’s skull to the Council for the Propogation of The Faith in Lyons, France. In 1949, according to a Marist Messenqer article of that time, it was in the Society’s museum at 72, Rue Sala. Other articles belonging to Fr. Chanel were given to the Mission in Futuna Island or sent to Lyons for the Society of Mary.

On June 20th 1848, the Sacred Congregation de Propoganda Fide decreed that the New Zealand Catholic Mission should be split into two vicariates-apostolic, and that the Marists should leave Auckland and, under the leadership of (new) Bishop Viard, undertake mission and parish work in the new Wellington vicariate.

In communicating this decision to his men, Fr. Colin also asked that Fr. Chanel's remains be brought back to France.

The relics were accompanied by Fr. Petitjean to Auckland - most likely early in April 1849. They left New Zealand on 15th April 1849 by the ship Maukin and arrived in Sydney, Australia on 4th May, Fr. Rocher S.M. who had been in Sydney since 1845 setting up the Procure (business office) for the Oceania Marist Mission, received the container which held the bones and took it to the Procure Chapel at Gladesville in Sydney on 7th May.

Fr. Rocher was very careful in making the decision as to when to send the container on to England and France. He looked for a trustworthy Captain, and a reliable person in London to receive the consignment, attend to the Customs, and have it sent on to Lyons.

Early in 1850, Fr. Bernin S.M., pro-vicar for Bishop Douarre, vicar-apostolic of New Caledonia, had to leave for France. He left Sydney for London on the Waterloo on 1st February 1850 taking Peter Chanel’s remains with him. On June 1st 1850 the remains arrived at the Mother House of the Society of Mary in Lyons, to the great joy, in particular, of Father Colin, founder of the Marists.

Many small parts of the remains were distributed after Peter Chanel’s beatification in Rome in 1889. One of his rib bones came to New Zealand and is now at the Marist Seminary in Auckland, for example. But substantially the relics remained in or near Lyons except the skull which was taken to the Marist General House in Rome at the time of Peter Chanel's canonisation in 1954.

In 1977, at the request of the Bishop of Wallis and Futuna, the main reliquary containing the major bones of Peter Chanel, was returned to Futuna Island. They travelled by air through Australia, New Zealand, (they were taken to the National Shrine at Russell in the Bay of Islands on March 30th 1977) on to Fiji, Vanuatu, New Caledonia and Wallis. They were placed in in the Church at Poi on Futuna Island, the site of the martydom, on 28th April 1977, the day this Saint is honoured throughout the Catholic Church in the world.

The 1985 General Chapter of the Society of Mary, decided that the major relic of the Saint, his fractured skull, should likewise be returned to Futuna Island. Accompanied by an Assistant-General of the Marist Order, Fr. Joaquin Fernandez, it arrived in Futuna on 7th November 1985. As someone remarked at the time, "what God has joined together....".

Author Anonymous. "The Story of a Sacred Relic- the body of Blessed Chanel" Marist Messenger October 1949. 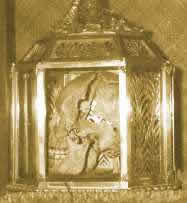